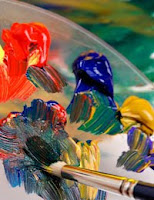 What makes one story stand out from the rest?

Stories are about painting pictures with words. Our canvas is the blank page and beautiful language is our paint. A painter will mix primary colours and experiment with tones and texture to produce his masterpiece. For writers, one way to lift the quality of our work is to enrich it with figurative language.


Shakespeare memorised over 200 different figures of speech which he used in his poems and plays.(1) But don’t panic yet! You’ll be surprised at how easily you can use figurative language in your writing. After all, we use it all the time when we speak. How often have you said, “I’m so mad I could chew nails?” That’s a figure of speech. A hyperbole to be exact: a figure of speech that deliberately exaggerates to emphasise a specific effect (in this case, the emotion of anger).

There are two main categories of figurative language(2): tropes and schemes.

A scheme(3) is when a writer changes the ordinary arrangement or structure of the words to create a special effect. A common example of a scheme is the climax, which arranges words in an order of increasing importance.

“And now abideth faith, hope, charity, these three;
but the greatest of these is charity.” 1 Corinthians 13:13

The second category of figurative language is a trope(4) . This differs from a scheme in that the writer brings about a conspicuous change in the literal, or standard, meaning of a word or phrase. Under this category we find the simile (as Robert Burns would say, “O my love is like a red, red rose”)(5), the oxymoron (as Milton would say “Yet from those flames/No light, but rather darkness visible”)(6) and the metaphor.

For more tropes, click here, because today we’re going to concentrate on the metaphor.

A metaphor is when a writer transfers a quality or attribute from one thing or idea to another in such a way as to imply some resemblance between the two things or ideas:

Life's but a walking shadow; a poor player,
That struts and frets his hour upon the stage.(7)

In each metaphor, there is a tenor and a vehicle. The tenor is the subject that the metaphor is applied to (“life”) and the vehicle is the metaphorical term itself (“a walking shadow”; “a poor player”).

Some ancient metaphors have become so much part of every-day language usage, they’re called dead metaphors(8). How often have you heard someone say, “I’ve had a full life”? Here the quality of a container is transferred onto the concept of life. But where did the metaphor originate? Because it's been around for so long, it’s hard to trace its roots and is thus considered dead.

An inactive metaphor is a metaphor that is another well-used part of language, but its origin and metaphorical meaning are still identifiable. An active, or live, metaphor is one that is new to language and may not be immediately apparent. These are the metaphors we, as modern writers, invent. When inventing a new metaphor, be careful not to mix it up. Don’t start by calling something a rose, and end by calling it a bird.

Do you think you know all there is to know about the different types of metaphors? Not yet. Richard Nordquist identifies thirteen (yes, thirteen!) different types of metaphors. Click here to explore the difference between an absolute metaphor and a conventional metaphor, or between a mixed metaphor and a submerged metaphor. My favourite is the example Nordquist gives of a visual metaphor: 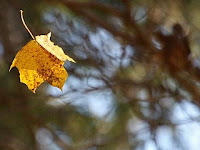 iness
In this double metaphor e.e. cummings associates loneliness with the falling of a leaf, and also visualizes the experience by isolating letters as they fall down the page. Brilliant!

The e e cumings poem is just one special sample of showing(9) why figurative language is a vital tool that every writer should use and use well. When using figurative language, always remember that "less is more",(10) otherwise there's a possibility that our writing will move from colourful to flowery. And, instead of having a masterpiece, we'll have a cliche.______________________________________________
1. Figures of Speech by Richard Nordquist
2. A Glossary of Literary Terms by M.H. Abrams3. Schemes (linguistics)by Wikipedia
4. Tropes (linguistics) by Wikipedia
5. A Red, Red Rose by Robert Burns
6. Paradise Lost Book 1 by John Milton
7. Macbeth, Act V, Scene V by William Shakespeare
8. http://anglosopher.com/dead-metaphors/
9. Alliteration: a scheme, wherein the repetition of speech sounds in a sequence of nearby words produces a stylistic effect. Usually only applied to consonants such as the “s” sound in this phrase.10. Oxymoron: apparent paradox achieved by the juxtaposition of words which seem to contradict one another.
Bibliography:
A Glossary of Literary Terms, M.H. Abrams
The Critical Idiom: The Metaphor, Terence Hawkes
The Elements of Style, Strunk & White

This is quite comprehensive. I had one college English teacher that advised us to make up our own descriptive phrases and not simply borrow old tired ones. Writing involves much more than some realize but it is an exciting journey; one well worth traveling.

JUDY: You're so right - writing involves far more than one realises when we begin the journey. The scary thing is the more I learn about writing, the more I'm certain of only one thing: I still know very little!:(

The trick is to master these rules in such a way that they become, not rules of grammar, but natural expressions on the page. Since there are so many reminders in everyday life of lazy speech and writing, I suppose the only antidote is constantly to read great writers. That way good writing becomes natural. Of course, there are times when what one wants is to write in the vernacular, but I like it when that is a conscious choice and not a lazy one. Thanks for this post, Ann. It reminds me to strive for a high standard.

Ann, you help many of us in countless ways with these informative posts. Thanks so much!

Thank you also for all of your kind words on my blog. You're a sweetheart.

A Cuban In London said...

I loved this post because it catered to both my linguistic and bookwormish side of me. I love metaphors, but was unaware of the existence of thirteen different types. And you chose e.e. cummings famous poem to illustrate your point. He's one of my favourite poets. So playful and naughty, and yet so serious.

Many thanks for the post and the links. They made brilliant reading.

I adore that eecummings poem. It blows me away that so few letters could carry so much meaning.

Wonderful post with links to more extensive information. Thank you! There's so much to consider when you write and edit. But the more you know, the easier and more natural the whole process becomes.

Ann, thanks so much for this newest craft lesson, full of details and excellent examples :). My 5th grade son just learned the term "hyperbole" this year and is finding it in everything he reads now--LOL!

You teach me so much, Ann. I really appreciate the time you put into your posts.

And you're right. Less is more. But I will rethink some scenes in my stories to paint a more beautiful picture.

Thank you Ann for all that you do to help us in our writing. :)

Thanks for taking the time to put this together. I know that I appreciate it. It's good sometimes to put titles to tools.

JUDITH: You’ve made such an important point about setting ourselves high standards; without making that conscious choice and striving towards it, our writing will never improve.

KELLY: My pleasure – I’m glad you can find some use for them. And I love reading the poetry you write – you have a gift for expressing deep emotion in verse.

CUBAN: Isn’t e e cummings just sheer brilliance in action?!?! ‘the Cambridge Ladies’ is one of my favourites and pokes such delightfully wicked fun!

HELEN: Lol! I hope the whole process does become more natural.
Sometimes I think the more I find out about the technical tools of writing the more I realise that all I know is how little I know! :)

MARILYN: Glad you enjoyed the post. Your son has great taste – in my everyday speech the hyperbole is quite my favourite mode of expression!! :)

ROBYN: I learn as much as I hope everyone else does – it’s such an interesting exercise doing these posts because there’s always something new to learn.

WERONIKA: It’s great that you found the post useful. Good luck with your re-writes on “Where the Doves Fly”! I’m perfectly sure that, with your dedication and commitment to the craft, you’ll manage just fine with them.

Oh my! I feel like I should pay you every time I read your posts. Thanks for the lesson, Ann. There were a few things here I had no idea about.

Fabulous- you are brilliant and I learn so much from your posts. Thanks! (I do so love you stories as well.)