How many times recently have you heard someone say, “I’m writing a book”?  Or, the next best thing, “I want to write a book”?  Have you ever said, or thought, “I can write a better book than this!”

No matter what a writer’s conscious reasons for first answering the call of the writing drum, ultimately the current surge in struggling writers is a symptom of Divine evolutionary forces at work: the new writer will inevitably find that the rewards he seeks may not be the rewards he ultimately receives.  His spiritual growth will come from learning to recognise that the urge to write a book may not end with a completed or published book. And, if he chooses to go the self-published route from ego rather than from spirit, he may have a published book, but will he have readers?
Can the spiritual evolution of humankind be a serious and time-consuming mistake?
Never.
Whether you finish your book, or not; whether your completed book is published or not; whether you become the next J K Rowling or not, when next you hear that distant drumbeat, calling you to write, write and write … stop. Listen. And then write some more.
For, with that first word you type on the first blank page you stare at, you’ll be embarking on a journey like none other: the journey to spiritual enlightenment and a new way of living.
###
This article first appeared as a guest post on BODYSENSING, the blog of T'ai Ch'i Chu'an and Alexander Technique teacher of 25 years Marguerite van der Merwe. Marguerite lives with her husband, the accomplished artist, Charles van der Merwe, in the small coastal village of Kleinmond, South Africa. 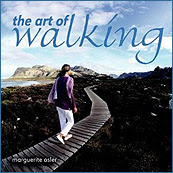 As Marguerite Osler, she is the author of THE ART OF WALKING (2011), a beguiling handbook on the art of natural, conscious walking and a path to health and the richness of well-being. Marguerite is the sister of Zen master, Buddhist monk, human rights advocate and author, Anthony Osler, (Stoep Zen, 2008)
Marguerite's next workshops on walking are:

THE ART OF WALKING  ~ ~ Walking Our landscape 2013, Workshop-Retreats

In these Workshop-Retreats, Marguerite  offers  active, caring connection to the only home we have – Gaia, our Earth Planet—practicing the many-splendoured  Arts of Walking, taking this Poise, Awareness and Relaxedness, into Nature’s service.  Daily  guided  Walkings in and around where we are,  imprint our intention to honour the Beauty and Sacredness of our Nature-al  Heritage.  In this Belonging we are all of value and ‘ensouled’ – ourselves, Great Mother Earth, the landscape in all its manifestations and occupants -   birds, bees, butterflies - plants, trees, animals, insects – kopjies, stones, dust - God’s great gifts of earth, air and water -   space, silence and sound.

Contact Marguerite at for more information about these workshops and other one-day workshops at margsmerwe@telkomsa.net