The Pain of the Covid Pandemic: Loss of Life versus Loss of Human Rights

The pain the pandemic has caused both collective society and the individuals making up that society is sad - heart breaking, in fact - and reflects so many deeper challenges that future generations are going to have to deal with and learn how to overcome.

One of the biggest challenges the young generation of today, and in the future, are going to have to overcome is how to find new ways of being, new ways of living, that both celebrate and protect the individual, while at the same time allowing the group, as a collective, to prosper.

Does anyone remember the 1998 animated movie Antz and Z, the one little ant who thought differently from the group?

This is my greatest fear arising out of mandatory vaccinations and the  dangerous stigmatisation of the unvaccinated: that to protect the group/species, the collective is, once again, determinedly using relentless propaganda to force mandatory Covid 19 vaccines and the carrying of covid vaccine passports, and any individual who thinks or chooses differently from the group is crushed by cyber-bullying, ostracization and scapegoating.

At 8 billion and growing fast, the human species is not facing the threat of extinction.  So where is this leading us as a species?

Who will stop the unbridled abuses on individuals that occur when we all believe in the propaganda of the government in power, like the Germans did under Hitler and the white South Africans did under apartheid?  Have we not yet learnt the lessons from history - and recent history at that! How short human memory is that we give up our hard-won freedom for the illusion of being safe.

How do we know what is really the truth about vaccinations when history time, and time again, has later shown so much misinformation with deliberate agendas? Human life, since the days of Mrs Ples, is inherently fragile, transient and finite. If one has the courage to lift oneself out of the fears, discomforts, disappointments of the personal experience of the pandemic - if we stop seeing ourselves as victims, helpless in the face of an overwhelming threat to our survival as individuals and as a collective - perhaps we'll come to realise there are much worse dangers to humankind on the prowl: the loss of our respect for those who hold different opinions to ourselves, the loss of faith and hope to support us through the inevitable dark times and the loss of freedoms that have taken thousands of years to evolve to the imperfect version of human rights that exist today.

So many serious concerns that could impact future generations are being lost in the uncompromising propaganda around vax vs unvax (from both sides!).

Every person who believes that vaccinations should be mandatory and vaccine passports are acceptable, so that they can have the freedom to travel and go to mega music concerts, should ask themselves this: do you want your children and your children’s children to be safe from death (a state of human existence which, tragically, is inevitable for us all) but be unable to think or choose for themselves, children who are not unique human beings fully expressing their individuality, but robotic-like beings who can’t be anything other than what is dictated by an arbitrary elite who history may prove to have implemented right or wrong moral standards and political or legal policies, such as mandatory vaccines and the carrying of vaccine passports? Just as history showed that forcing parts of the population to wear yellow stars or to carry a "dompas" were not, as the propaganda of the day stated, acts for the common good but rather acts of oppression and tyranny that had dreadful consequences.

The terrible challenge for today's generation - and for future generations - is to learn how to fiercely protect the human freedoms that encourage individualistic thinking while still having the faith and trust that the group will survive. This is not to deny the very high cost that each individual pays in terms of all the little ordinary joys and pleasures that have been denied - that grandchild, known only through a zoom screen, the funeral no-one could attend; the eagerly anticipated wedding or holiday that couldn't be shared with loved ones - all such valid personal sorrows, but all part of the necessary sacrifices needed to strengthen and evolve the species as we head off into an unknown  and seemingly dark, scary future.

Despite these personal heartaches, the light of hope is there, as it always has been.

The earliest recorded pandemic happened during the Peloponnesian War in 430 B.C.E. and as much as two-thirds (66%) of the population died. Through the ages there have been many more pandemics, including the infamous Spanish Flu pandemic of 1918-1920, which inconclusive data shows killed between 24,7 million to as many as 100 million people globally. Currently, as at 21 December 2021, the Covid 19 pandemic has killed 5,8 million people globally (just under 1%).

Each pandemic death is a personal tragedy, but the loss or voluntary surrendering of our human rights out of fear of dying, or grief for the lifestyles and lives that the pandemic has taken from us, is surely a greater tragedy.

Oh, this is indeed a terribly complex situation. But, if we can work together, like Z and his fellow workers from Antz, to build a ladder that bridges the personal pain of the covid pandemic with the critical need to protect the individual's human rights from draconian laws then - as the human species has survived previous pandemics throughout history, we’ll survive this pandemic. And I’m positive we’ll soon be living in a world, while very different to pre-covid times, will still be a world that can be celebrated and enjoyed in new and exciting ways.

And, hopefully, we'll also still live in a world that celebrates and enjoys the freedoms of the individual's human right to choose.

The Dangerous Stigmatisation of the Unvaccinated

Out of these, tyrannies and abuse of power is born.

One only has to look at the rise of Hitler (which led to the Holocaust in which 13 million stigmatised people were murdered, 6 million of whom were forced to wear yellow stars to show their status)  or the legal implementation of Apartheid in South Africa (a minority rule which led to millions of people being forced to carry a ”dompas” & live segregated lives.)

Where is this idea of mandatory vaccines & carrying vaccine passports taking us? Are the unvaccinated eventually going to be forced to live in townships/ghettos for the unvaccinated?

Why the unjustified scapegoating of people who exercise their democratic right to make a free choice and yet are bullied & stigmatised for that choice?  Propaganda is still as powerful a tool in shaping the majority of the collective’s thoughts as it ever was in the hands of the Nazi or Apartheid governments.

It breaks my heart that humanity has not evolved one bit and, on both a collective and individual level, still seeks a scapegoat whenever life is challenging.

We - both vaccinated and unvaccinated - are in this together, and we need to find a way forward that will not repeat the terrible human errors of the past - scapegoating and stigmatising those who are different or who make different choices to the collective herd.

From the reputable medical magazine The Lancet: “Stigmatising the #unvaccinated is unjustified” 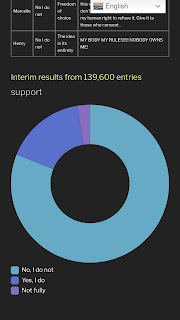 On Saturday 4/12/21, after 09h43 (the exact SAST of the eclipse) I’ll reveal the message of each pile - the crystal, the African American Tarot card and the Angel card for encouragement. #TarotTakeYourPick 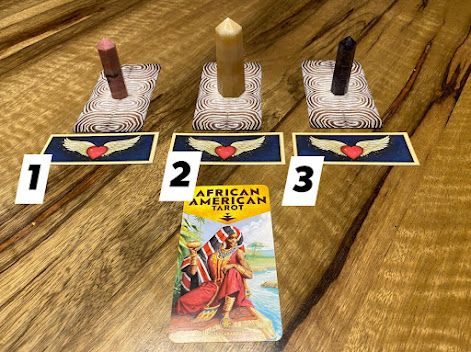 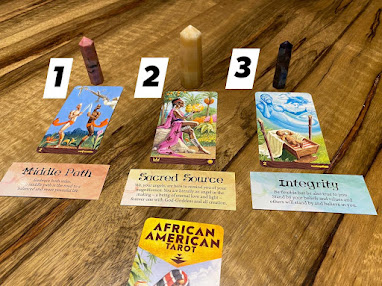 Did you #takeyourpick? Here are the Solar Eclipse 4/12/21 messages from each #tarot #card pick:
PICK 1:
Rhodonite | 2 of Swords | Middle Path
With Rhodonite’s ability to show both sides of an issue, the 2 of Swords reminds us of the duality inherent in life. Unless we find a way to unify the different aspects of ourselves, we’ll be unstable, separated by the divisions - mind versus body, faith versus fear, black versus white, vaccinated versus unvaccinated. The Angel message “Middle Path” reminds us that we need to embrace both sides; that taking the middle path is the road to a harmonious and peaceful life.
PICK 2:
Yellow Calcite | Queen of Pentacles | Sacred Source
Uplifting and energetic, yellow calcite connects us to the highest source of spiritual guidance. The opulent Queen of Pentacles suggests that this is a time of navigating life through the 5 earthly senses. However little or much there is, the willingness to share with and nurture others springs from a good use of personal abilities, inner security and faith. The Angel message “Sacred Source” reminds us of our magnificence - we are beings of eternal love and light, forever one with the Divine and all creation.
PICK 3:
Amethyst | 2 of Wands | Integrity
Amethyst can calm or stimulate the mind as appropriate to the situation. Encouraging the acceptance of new ideas balanced with common sense, amethyst works well with the 2 of Wands. Containing both endless possibilities and fear of an uncertain future, the 2 of Wands struggles to balance the need for activity with the need for stillness. Confusion and anxiety could result until one remembers the Angel message of “Integrity.” This calls on us to be flexible, but firm; to stand by our beliefs and values in a way that encourages others rather than antagonises.
Have a safe and happy holiday season!
Posted by Judy Croome | @judy_croome at 09:43 No comments:

Free Kindle copy of “the dust of hope”

Now is your opportunity to get a free holiday read! I’m running two promotions for my latest volume of poetry “the dust of hope”
AMAZON KINDLE - ends 4/12/2021
#free on #kindle offer ends 4 Dec 21 “the dust of hope” by @judy_croome You’re welcome to  #read (and #review) these #rune #poems of #hope during the #pandemic GET YOUR FREE REVIEW COPY HERE
BOOKSIRENS - ends February 2022
ARC’s (Author Review Copies) available on Booksirens - only 250 reader spots available GET YOUR FREE REVIEW COPY 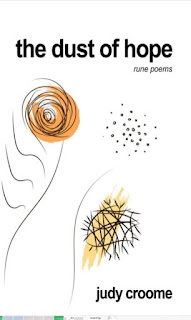 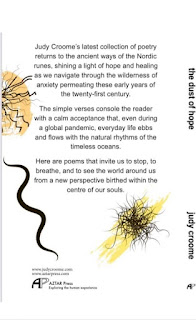