"THE WEIGHT OF A FEATHER & Other Stories" goes on tour

The Weight of a Feather Book Tour Schedule 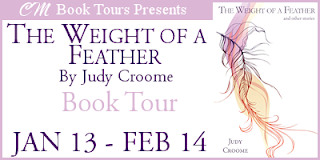 Email ThisBlogThis!Share to TwitterShare to FacebookShare to Pinterest
Labels: the weight of a feather

A White South African Reflects on the Death of Nelson Mandela

On June 12, 1964, I was five-and-a-half years old. On that day, Nelson Mandela was sentenced to life imprisonment for civil disobedience against the then ruling government of South Africa, the oppressive white regime of the Nationalist Party.

Nearly fifty years later, on December 5, 2013, Nelson Mandela died peacefully in his bed, surrounded by his family, and the world has gone into a frenzy of mourning.

I watch the worldwide television news with a sense of both unreality and immense national pride.  Who would have thought, after the secret shame of having to defend myself throughout all my formative years for being born a South African of the wrong colour, today I would be proudly South African, knowing that, despite its tragic past, this land has become one of hope and inspiration, because of this one man?

But, other than his private and political circle, who of these mourners, from every corner of the globe, really knew Nelson Mandela?
And what did he mean to me personally, a white middle class child of apartheid South Africa?

There are three Mandela moments that had a major impact on my life:

A few years ago, after he had retired from political life in South Africa, I read a story about Nelson Mandela meeting an ordinary family walking on the beach. I can’t remember the details – Was it an American or a South African family? Where and when did this incident occur? – but I do remember the impact this story had on me for, this most famous of men, this extraordinary, world-famous man, humbly introduced himself to the family, spent a few moments chatting to them and then continued his beach walk.

He did not, as so many famous (and not so famous!) people do, make the egotistical assumption that this family would automatically know who he was.  He met them as his equals. Who, really, can be equal to Nelson Mandela, the man, the legend? In his eyes, this ordinary family was his equal and he met them as one ordinary human being meeting another. In doing so, he became to me a symbol of what true human dignity and grace should be.

With a gifted sportsman and a white Afrikaaner for my Father, how could the 1995 World Rugby Cup final not be another defining Mandela moment for me? I’ll never forget the surge of emotion, the overwhelming sense of hope and pride that filled me when Mandela walked out onto the Ellis Park pitch wearing the No 6 jersey of the Springbok Captain, Francois Pienaar.

Who knows what strength of will it must have taken, what inner emotional struggle Mandela had to battle with to pull on that green-and-gold jersey that symbolised so much of what he had hated and fought against his whole life?  But he did it and, in that simple act before the whole world, he proved that he practised what he preached: peace, tolerance and understanding of a culture very different to his own.

History has already proved that Mandela had right, justice and the world on his side during his fight for freedom. But, arguably, Mandela’s greatest legacy to the ages, his greatest achievement which raised him so far above the many ordinary men and women who suffer physically every day, in jail or out, is that, once he was released from prison, Mandela rose to his highest potential as a human being by conquering his inner demons.

How will we ever know which struggle was greater for him: enduring the harsh physical conditions of  prison life on Robben Island or that moment he pulled on that green-and-gold jersey representing everything he had fought against for so long?

Mandela himself would be the first to remind us that making peace, like making love, requires two people to achieve a satisfactory end. Even as we mourn the loss of this great man Mandela, let the world not forget that another man had to walk that same long road with him to bring a new democratic order to this country of ours. And, without that man, Mandela would not have risen above his past to become a living legend and an inspiration to all people, he would have remained a prisoner, both physical and spiritual.

Former President FW de Klerk, the last white President of the apartheid government of South Africa and, together with Mandela, the 1993 Nobel Peace Prize Laureate, had to turn his back on his whole personal and political history and voluntarily give away his power when he stood alone and made the momentous decision to free Nelson Mandela, unban the ANC and enter negotiations for a peaceful transference of power from minority white political rule to majority black political rule.  What other politician, holding all the power, has had the ability to do that?  What ordinary person gives up their own power to another for an unknown future?

As we South Africans go forward into 2014, the most important critical election year in our young democracy, an election year when we have a corrupt and power-bloated ANC government in power and when Mandela’s vision for South Africa is in real danger of slipping onto the road of tyranny so many African democracies have walked before us – we, and the world, can learn from both these men.

From Mandela, the victim of an unjust society, we can learn endurance, forgiveness, tolerance, overcoming anger and bitterness, and the right use of power: that great men serve their people with humility, grace and sacrifice.

From FW de Klerk, the last titular head of that unjust society, we can learn to face and accept our inner darkness, that shadow self that lurks within all of us, and we can learn to make new choices irrespective of our personal, ancestral and racial histories.

For, if we do not learn from both these great peacemakers, from the powerful black freedom fighter and the courageous white Afrikaans leader, we face a future in which our past will only change colour and the huge potential of this most beloved country will be shackled forever in repeating the human tragedies of the past rather than living up to the ideals Nelson Mandela sacrificed so much for.

– Nelson Mandela, Rivonia Trial Speech
Another of South Africa’s four Nobel Peace Prize winners, Archbishop Emeritus Desmond Tutu, once spoke of South Africa as a “rainbow nation,” a delightful image of all the different colours living in harmony in our newly democratic country.

But the different colours in a rainbow’s arc, as beautiful as they are, are still separated from one another by invisible borders.

I prefer to think of a future South Africa that is an exquisite quartz crystal: a colourless gem that when held up to the light, glitters and shines with all the beauty of the rainbow contained within it.

We go forward into 2014, into our future as an evolving democracy, without the living Nelson Mandela.

Let us honour his ideals, his life and his legacy by leaving the past where it belongs: behind us.

Let us look within our own hearts and strive to walk the same path of inner struggle and personal change that both Mandela and de Klerk walked, so that we can make South Africa a country known not only for its natural beauty, but also a place of integrity, tolerance and good governance.

And, in Nelson Mandela’s own words, "let it never be said by future generations that indifference, cynicism or selfishness made us fail to live up to the ideals” which the great man himself lived and fought for throughout his long and fruitful life.

Hamba kahle, tata Madiba. You showed us the way and we must continue the journey.

We can change the world and make it a better place.
It is in your hands to make a difference.
~ Nelson Mandela
Posted by Judy Croome | @judy_croome at 08:43 7 comments: