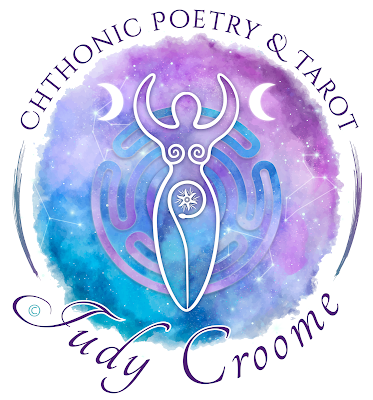 There's much excitement in this part of the world today! LOGO LAUNCH DAY has arrived!

The image and colours just speak to my soul. Kyle da Silva is a gifted and accommodating designer - he heard what I wanted in one discussion, and this is the result. The logo isn't random: every detail is there for a specific purpose.

I have three great passions in life - cats, poetry and the occult, specifically tarot and astrology. While we couldn't squeeze a cat into the logo, we did manage to combine poetry and the occult. My poetry (all my writing) is challenging to define. By diving deep beneath the surface of everyday life, I reach for the vast unknowingness of the Great Spirit (or G-d, if you will) by delving beneath the surface of the ordinary details. This is expressed in the title "Chthonic Poetry & Tarot." 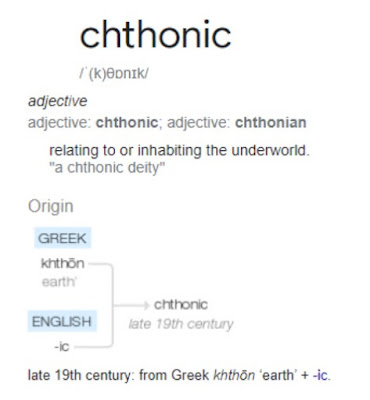 COLOURS:
Turquoise is connected to the spiritual world, intuition, psychic sensitivity, and protection from harm and negative energy. Turquoise is often used to encourage honest communications and to assist in communications with higher dimensional beings.
Purple/Violet relates to self knowledge/ spiritual awareness. It aids union with your higher self, with spirituality, and your higher consciousness.
White assists with clear-thinking, helping to reveal the truth within situations and people. The colour of Divine Love, white leads us towards an inner harmony and higher spiritual consciousness. And for those, like me, who are daydreamers of note, the transformative power of white helps with concentration and overcoming a lack of focus.
THE BACKGROUND:
Look closely: there are two background images. The first is a vast sky, transforming from day to night, with the star constellations beginning to shine their light. The second (immediately behind the figure with the upraised arms) is the Stropholos of Hecate, or Wheel of Hecate. 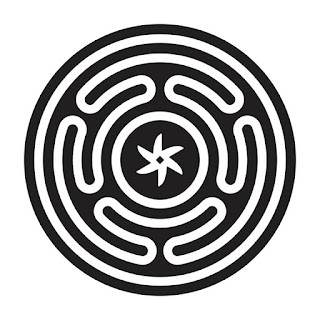 Hecate's wheel is an ancient Greek symbol, emblem of the moon goddess Hecate in her triple goddess aspect. The second century text, "The Chaldean Oracle", describes the symbol as a labyrinthine serpent (representing rebirth and renewal) surrounding a central Spiral. It is symbolic of the Iynges, mysterious beings whose names may be translated as "wheels" or "whirls" and are emanations of Divine thought. Other symbols of Hecate include: torches, dogs, keys, serpents, and of course, the crossroads. Read a more detailed description of the symbolism of the Stropholos here.
THE FECUND GODDESS:
The feminine figure in the middle of the logo represents Hecate and her symbols. As a triple moon goddess, she guards the crossroads and liminal spaces between worlds. Her upraised arms form the shape of a moon (the present); on each side of her upraised arms are moons representing the past and the future. Her belly button covers the centre of the background Stropholos and is the centre spiral of the wheel, representing the portal into Divine knowledge. And, finally, rising from her feet, is the serpent, the one who sheds his skin and is reborn into new knowledge, the keeper of the knowledge of good and evil.
Hecate is a powerful lunar Goddess who rules over the earth, sea, and sky. She is associated with the concept of Maiden, Mother, and Crone: representing the three phases of the female life. Hecate is worshipped as a protective Goddess, who bestowed prosperity and blessings on the oikos (household). More at home on the fringes than in the center of Greek polytheism, Hecate is intrinsically ambivalent and polymorphous, straddling conventional boundaries and eluding definition.
Thanks to her association with boundaries and the liminal spaces between worlds, Hecate is also recognized as a chthonic (underworld) goddess. As the holder of the keys that can unlock the gates between realms, she can unlock the gates of death. Like Hermes, Hecate takes on the role of guardian not just of roads, but of all journeys, including the journey into the deep unconscious we keep hidden in the underground of our psyche.
You can read more about Hecate's role as the Cosmic World Soul here and her general mythology here .
CONCLUSION:
As I begin my new path in life, the ancient energy of Hecate resonates deeply within me. This logo has captured that essence and I'm excited to share it with you.
BIBLIOGRAPHY:
White Lotus Magazine
Colour Therapy
Symbol Sage
Wikipedia
Hekatean Witchcraft
Posted by Judy Croome | @judy_croome at 15:23 1 comment:

Astrology South Africa May 2021 Tarotscope
Judy Croome explores what May 2021 has in store with a 3 card spread using Robin Wood's Tarot Deck.
Here's my second official Tarotscope video for Astrology South Africa. There's a few technical glitches, but I hope I'm forgiven as I made the video with one eye only - my right eye had surgery last week; the left eye surgery is this week!

At the very end of the video you'll have a sneak preview of my new logo, which I'm SO excited about. Just a few more tweaks by designer Kyle da Silva, and then I'll do an official logo reveal!
Here is the Youtube link to May 2021 Tarotscopes - if you enjoy the 5 minute video, please remember to click the LIKE button on the YOUTUBE page. Or watch embedded video below.
The crystals are Barnacle Master Quartz (a gift from the amazing Joshua Maree, visionary and illuminist ,and the creator of Androgynous Keys) and a Rhodonite tower and slab (both gifts from my beloved late husband Dr Beric Croome).
A Barnacle Quartz helps to stimulate a group cohesiveness and a willingness to work together, while Rhodonite is a stone of compassion, an emotional balancer that clears away emotional wounds and scars from the past, and that nurtures love. (See photo below video) 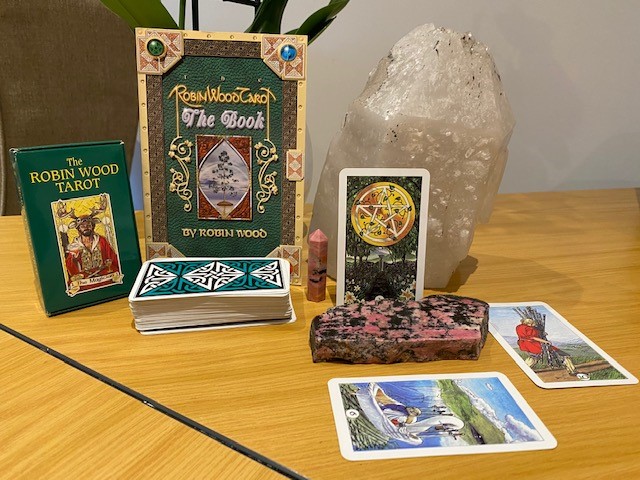