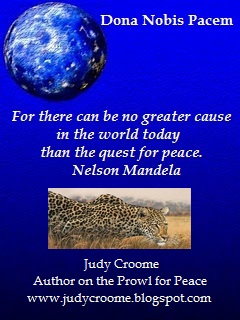 As South Africa’s iconic leader, Nelson Mandela, points out, the quest for peace is indeed a cause for universal concern.

But how do ordinary people like you and I make a real difference in a world beset with troubles and hatred?

How right she was!

For, if we can’t even negotiate a small, personal peace — during an argument with our family members or our neighbours — how can we expect the world to live in peace?

Lasting peace begins within the parameters of our ordinary lives. Once we, as individuals, are able to live in peace and harmony with our own flaws and with an acceptance of the trivial differences that separate us from those people closest to us, then we will be able to help spread that peace to our neighbours, our communities, our nations and, ultimately, the world.

Today, along with nearly 100 other bloggers, I’m blogging for peace.

Tomorrow, and all the days that follow, I will strive for peace within myself. When I’m tired and I want to snap at my husband, I’ll try a smile of peace instead.  When my neighbour plays his loud music incessantly, I’ll aim for a peaceful solution. And when the rude driver in the shopping mall steals my parking, I’ll attempt to keep my inner self calm and peaceful.

No-one can disturb my peace: I can only give it away. If, no matter what the external circumstances, I can strive for peace within my soul, perhaps then I can be a flicker of hope in the midst of the chaos and confusion, the despair and sorrow that is overwhelmingly present in our world.

And, from that flicker of hope, from that simple smile, perhaps peace can spread from my heart to yours…and into the greater world beyond.

Peace be with you and yours, today and all the tomorrows that await.

Visit the founder of BlogBlast for Peace, Mimi Lennox and visit the links to other blogs to find out how peace is beginning to spread throughout the world...
Posted by Judy Croome | @judy_croome at 06:00 31 comments:


Today my author guest is Jessica Bell. An Australian, Jessica now lives in Athens, Greece and has recently had her novel "String Bridge" published. "String Bridge" is not your typical women's fiction. This is a story about a woman filled with regret who still finds the courage to strive towards her dreams. Can you tell us more, Jessica?

How would you describe String Bridge to someone who has not heard of it before? I hope you don’t mind if I quote an author friend of mine to answer this. The way she describes it flatters me so much and I can’t possibly thank her enough! "Jessica's prose has a wonderful lyrical quality that transcends preconceived (and often incorrect) literary boundaries. As Jessica would concede, every word, every sentence, every paragraph is written and re-written until the page sings … Jessica’s work overflows with exquisite description, perfect metaphors, tight dialogue, and brilliant use of sensory detail. Somehow she has the ability to take a seemingly ordinary three-chord type story and turn it into a mainstage event.” Dawn Ius, Bridge Social Media


What was your favorite section of the book and why? I can’t really answer this without spoiling the story, so I’m just going to say that my favorite part of the book is the darkest part. I really struggled to write this section of the book. I even put it off until the very end because I dreaded experiencing the emotions. Of course, I had to eventually. Cried the whole time I wrote it. It’s very raw and a little shocking too. I still can’t believe some of the material in this novel came from me!


Who do you imagine is your ideal reader? Any woman from the age of 18 and up. I don’t think it’s very appropriate for young teens as some of the language and images can get a bit coarse. The story may be centred on music and motherhood and marriage, but ultimately it’s about overcoming loss. And I think every person on this planet can relate to that. I also think some men would get something worthwhile out of it too. Even if they can’t identify with the story, I think they’d at least be able appreciate the way in which it’s written. 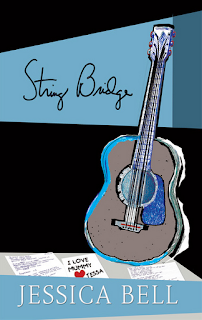 Which book do you wish you’d written and why?  I think I’ve said this over and over in answer to various questions. Housekeeping, by Marilynne Robinson. I don’t think I’ve ever read such a brilliant piece of literary work in my life. In my opinion, it’s even better than any of the classics I’ve read, and I’ve read plenty.


What famous person, living or dead, would you invite for a tête-à-tête, and why? Oh my, there are so many inspirational people I would love to invite such as Patty Smith, Nick Cave, Marilynne Robinson, Margaret Atwood, Raymond Carver, Gwen Harwood, Anne Lamott, Kate Bush, Joni Mitchell, Elliot Smith and many more. But, I guess my first choice is PJ Harvey. Her music has boosted my passion for every single creative endeavour I have pursued. Really, she just pushes the right buttons. I can’t tell you exactly what buttons they are, but they definitely make something inside me spark.

Vedrana Rudan is a Croation journalist turned author. In an interview with Ana Lucic she said this, "I am a human being who lives in a country in an age that allows the poor only one weapon in their duel with life, and that’s swearing. Swearing is the scream of a victim, their only normal way of speech." When Beric and I travelled through Croatia, we were struck by the poverty, which we didn’t expect in a European country.  How do you feel about her statement and what do you think of swearing in novels? I think what Ana says is brilliant and certainly holds a decent amount of validity in this day and age. There is nothing wrong with swearing. Sometimes it’s almost like tool to release an unwanted abundance of emotion. I understand that concept completely. I have no problem with swearing in novels. In fact, there is a decent amount of it in String Bridge. The thing is, it’s there for a reason. And that reason stems from the fact that swearing in a language that is not your own often seems like a game and it doesn’t tend to have the same impact as swearing in one’s mother tongue to the person uttering the words. But it does to the person on the receiving end. I explore this concept in String Bridge. Basically, what I’m saying is, it needs to be there for a reason. Even if that reason is as simple as it being a character trait (i.e. the person swears a lot just for the sake of it). I resent it when readers claim that an author uses too many swear words. Writers have a reason for doing everything. Sometimes we mull over a single sentence for hours. Nothing is ever there for the sake of it. Also, what’s the big deal? They’re just words. It’s not murder.

Where can we find out more about "String Bridge"?

Buy the soundtrack (Note from Judy: Jessica's voice and lyrics are terrific!)


Jessica, thanks for an interesting view into your world. Wishing you the best of luck with your story and looking forward to your next book!
Posted by Judy Croome | @judy_croome at 08:00 5 comments: