Shakespeare in the Shadows

Each chapter in my novel Dancing in the Shadows of Love begins with a quotation from one of the greatest writers ever to have lived: William Shakespeare.


Within the quote lies the essence of the chapter it introduces; each quote hints at the arc the character follows as they grow throughout the novel.


For those of you who like to source their quotes, you'll find a complete list of the quotes used, which of Shakespeare's plays it comes from and the full quote on the Dancing in the Shadows of Love blog.


“Charity itself fulfils the law,


Next month I'll go into more detail about the significance of this quote from Love's Labour's Lost!
Posted by Judy Croome | @judy_croome at 12:21 9 comments:

Email ThisBlogThis!Share to TwitterShare to FacebookShare to Pinterest
Labels: dancing in the shadows of love, judy croome

Where have all the Book Reviews gone?

For those of you who have missed my book reviews and wondered whether I've stopped reading, I'm now a member of Goodreads and also Library Thing. I'm now posting all my book reviews on both sites.  These are both wonderful "bookish" communities and I intend to do a lot more reading and a lot less blogging in future!


All my DVD reviews will be posted on Amazon.com.
In the sidebar to the right, you'll see a widget that shows the books I've recently read. Scroll over a cover, click the link and you'll be taken to the relevant Goodreads page.
In celebration of my recent conversion to self-publishing, I've been reading numerous self-published novels. I'm so impressed with the unique creativity in each of the books.

The only concern I have is that some of the self-pubbed books, particularly those published in e-book only, do need more attention paid to formating and typing errors. But the loss of technical perfection is more than made up for by the vivid imaginations and wide array of interesting perspectives.

Click on each link below to read my reviews on some recently self-published books:


Not only will my book reviews be migrating, but I will be too. I'm going back to the basics of what being an author is all about: writing and reading. I'll still be hanging around the blog-o-sphere, updating my blog and visiting blogging friends, but you'll mainly find me hanging out at Goodreads and LibraryThing. I'm looking forward to seeing you there!
Posted by Judy Croome | @judy_croome at 02:00 12 comments:

YAY!! Dad is home where he belongs. He's still very ill and frail, but he's home where we can fuss over him as much as he needs. The doctors and staff of Morningside MediClinic and the staff of ER24 ambulance service were great!


Thank you one and all for the heartwarming support in so many big and small ways.


An especially big thanks to my darling hubby who was, as always a steady, solid rock of calm in the centre of the storm. And to my big sister Iona and her husband Ian who flew back here from their UK home.


Today I must spend the day wading my way through 11 days of dirty washing and then my next task is to catch up on blog visits and tweeting!
Posted by Judy Croome | @judy_croome at 10:37 11 comments:

Update on my Dad

I'm a believer in the power of prayer - I don't care what shape or form prayer takes, but the power of the Divine is out there...in a friend's biblical quote (John 14:27) to blogging & yoga friends sending me kind thoughts, lighting candles and doing meditations. In the 24 hours since I spoke of Dad, his improvement is remarkable. The long term damage is severe, so we're on a sharp learning curve, but he's a fighter & a survivor. Thanks to all for the support and care.
Posted by Judy Croome | @judy_croome at 08:00 14 comments:

I'll be off social media until further notice as my beloved Dad had a major brain stem stroke last Sunday, so my attention is with him. Will catch up when I can.

The old bull falls to his knees, his tusks gouging another furrow in the rough stubby grass as he struggles to rise one last time. He trumpets an angry roar, but still it does not help: he lies on his side as the sun rises higher and higher. His eyes drift shut…and the dust settles slowly around him.

Please keep him in your thoughts and prayers.  I'll reply to everyone as and when I can, but know that I appreciate all comments and, most especially, the prayers, love and support.

Have you ever devoured a novel so fast you couldn’t put it down? You finish the novel, slightly dazed by the speed at which the author tumbled you along the character’s journey, and wonder how she did it. How did she keep you gripped from Page 1 all the way to the end?

Like the sturdy brick, scenes have a job to do: they must either advance the story or illuminate a character. 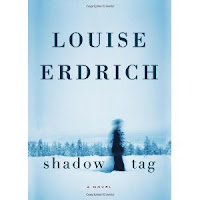 Sometimes, when you don’t enjoy a novel, it helps to go back and unpack each scene.

Louise Erdrich is one of my favourite authors.  Her voice, her language, her topics speak to me on a level that very few modern authors do. So I was sadly disappointed when I read her latest novel “Shadow Tag”…until I looked more closely at the conflict that drove a few of the scenes.

Here are the three scenes I analysed:

Conflict: The overt conflict was the build-up to Louise’s confession that she is Irene’s half-sister (they shared the same father) The more subtle conflict was the contrast between the two women’s childhoods and how that affected who they are today. Louise’s mother married a good man, and Louise had a stable childhood in the city. She’s at ease with her sexuality and is in a stable, loving lesbian relationship. Irene’s childhood was shameful, with a womanising father and a promiscuous mother; she was cut off from her sense of Native American identity and sense of family by her parents’ actions; an alcoholic, and promiscuous, she’s in an unstable and destructive relationship with her artist husband Gil.

Conflict: To an outsider this scene – a family gambolling in the snow playing the game shadow tag – would be idyllic. The conflict lies in the falseness of the scene. The preceding scenes strip away the family dynamics to their essential dysfunction. The poignancy of the scene lies in the desire of all the family for this moment of family togetherness and simple happiness to be real. But the veneer of love and normality is too thin; it’s as elusive as the shadows they chase. Gil, his destructive genius controlled for once, ‘hides his shadow tightly’, but the scene ends where he leaps out from his hiding place to catch his laughing family and ‘his shadow sprang across the field’, highlighting how close to the surface the family’s final disintegration is.

By analysing these scenes, I realised that, in my first reading of the novel, I had seen only the ugliness of the characters Irene and Gil and not the conflict that motivated that darkness they reflect. Irene, in particular, represents the tragic loss of the Native American soul.  After this realisation, the story took on a whole new meaning for me.

The next time you read a book that you dislike, try to unpack it brick by brick. You don’t need to break it down to its foundations: take only a few scenes that you think may be critical.  Look at the characters; look at the conflict that drives the scene; and look at how the scene links back and forward to other scenes.

And, as you close the book, you may be surprised at what secrets the author has revealed to you as she carefully set each scene that tumbled you along page by page.
Posted by Judy Croome | @judy_croome at 15:21 12 comments: