Sunday 25/8/2019 is a very significant date both personally and astrologically. It's exactly 29 years from the day of Beric's and my first date on 25/8/1990 and for those with an astrological bent, 29 years is one full Saturn Return cycle - Saturn is the Lord of Karma, the Great Teacher.

This year, on Sunday 25/8/2019, Hugo Marcus (who was the best man at our wedding in 1992, and has known Beric since their army days!) and I will be at Injisuthi Camp in the Drakensberg.

This peaceful, beautiful part of the Central Drakensberg is both Beric's and my favourite place on earth.
Beric and I, and Beric and Hugo, would try and visit Injisuthi in alternate years to stay in Hut 17. with its three-sided view of the surrounding mountains. From there, we'd do walks into the 'berg - to the Battle Cave, the Grindstone Cave, the Old Kraal and many others, including the most scenic walk of all, the hike up to the viewpoint at the top of Van Heyningen's Pass.
This year, on Sunday 25/8/2019, Hugo and I will carry Beric’s ashes up to the top of Van Heyningen’s pass high above the Injisuthi camp. There, Hugo will say some prayers from the Mourning Kaddish and I'll say some prayers honouring Beric's paternal and maternal ancestral lines, and thanking Beric's precious soul for the 29 years of love, blessings and happiness that we shared.

Then, when the moment is right, we'll release Beric’s ashes over the edge of the viewpoint overlooking the Injisuthi Valley, also known as the Valley of the Well-Fed Dogs because, as local legend has it, once, long ago, the game in the valley was so lush and plentiful that even the dogs were well-fed and happy.

This is an 8km round day trip requiring some steep climbing. THE ASHES CAMPAIGN is to get me fit and thin enough to climb the mountain to set Beric free in this place that was so sacred to him.

Here’s to a successful outcome of THE ASHES CAMPAIGN!!! And, while you're eagerly awaiting the outcome, here are a few of the tributes to my beloved Beric that appeared in local newspapers: 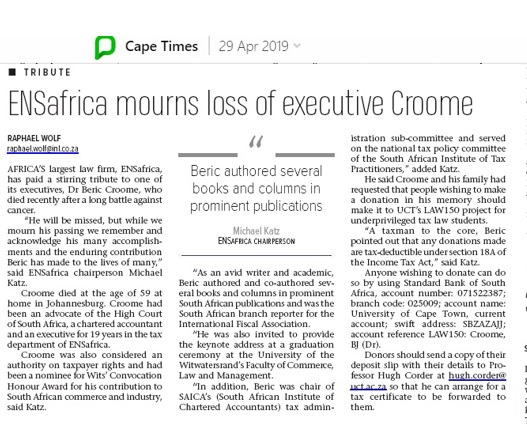 Hi Judy - I do hope all goes well for your climb of remembrance, as well as celebration of a life well lived, for a man who embodied humanity for all. Be at peace as you climb with your bestest of friends Hugo, ... I am sure all went well and Beric is at peace in his beloved Drakensburg.

Congratulations and good luck with the goals you've set yourself ... all the very best - Hilary

Thanks Hilary hope all is well with you! xx