On Saturday 26th April 2014 I was at the fabulous, funky Indulgence Cafe in Northcliff to read from my latest book THE WEIGHT OF A FEATHER and OTHER STORIES. I also chatted to Mandi Friedman, Marcia Love of Skoobs Bookshop in Montecasino and the lovely patrons of Indulgence Cafe about writing, reading and cats. I always talk about cats. We all brought along any old or spare books as Indulgence Cafe owner Mandi collects books to raise funds for Animals in Distress. 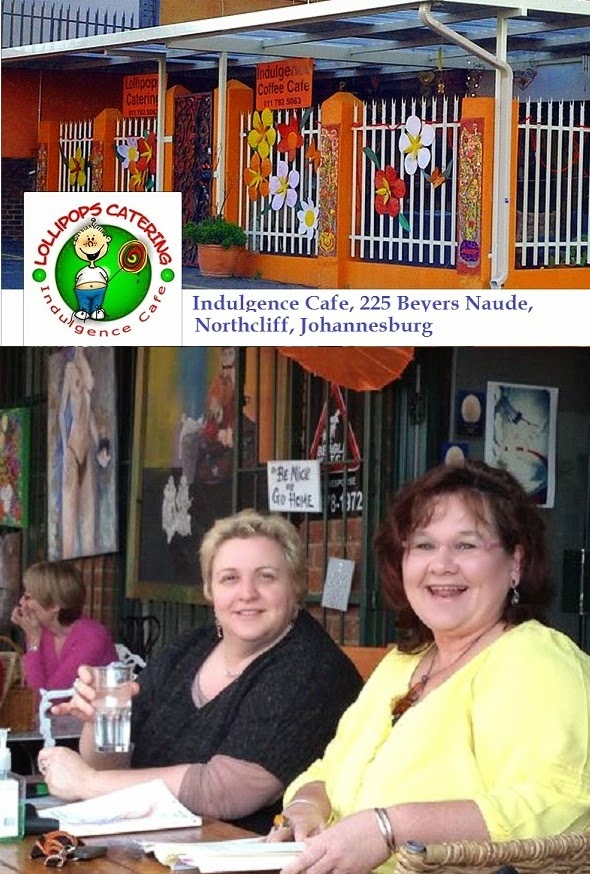 Visit Indulgence Cafe website to browse their delicous menu, which has some yummy vegetarian dishes. You'll also find directions on how to get there.

Email ThisBlogThis!Share to TwitterShare to FacebookShare to Pinterest
Labels: author interview, author reading, the weight of a feather

Good luck! I hope it's a major success

JUDITH: It was great fun! Some live tweets were taken by people there and you can see I was having a terrific time :)

HILARY: It did go well, thanks, and we got lots of books for Animals in Distress!

Sorry, I couldn't come to your reading. It was to far away.

I followed the South African election in the news today, and I was quite surprised when I heard that Jacob Zuma won again. How was this result received in South Africa? Was it a surprise for you as well?

Our election day wasn't as good as we’d hoped: Julius Malema’s radical EFF party made big inroads (dangeours as he is more corrput and greedy than any of our current heads of state), the ANC retained Gauteng, and nationally got a 63% majority (we were hoping for a decline to just below 60%)– this is dangerous because if they form a coalition with EFF/Malema then they can change the constitution. BUT on the good side, although it is not a party I am generally in tune with, DA gained hugely in votes and grass roots people becoming more dissatisfied than ever before. The problem with that was there was no alternative to the ANC for them to vote for(or me - COPE so disappointed me last election with their leadership power struggles, just as AGANG disappointed me this time) So many ordinary folk that I spoke – shop counter people, parking attendants, those who are core ANC supporters, all said we didn’t vote because we didn’t know who to vote for. I practically begged them to vote because by not voting they were, of course, giving the ANC a bigger vicyory margin. Like COPE , in 2009, the AGANG party was such a disappointment, and wasted an opportunity. The next five years are going to be very interesting – DA’s parliamentary leader Lindiwe Mazibuko is taking time out to study politics at Harvard, she still expresses her loyalty to the DA so we hope that when she comes back she either starts her own young party or (like Obama did in the US) steps in and spices up an old party (the DA). SO, interesting times ahead – many dangers of course, especially corruption and greed and voter apathy and the ANC hauling out the tired old race card to whip up divisions – but South Africa the beautiful will struggle on and we'll hope that 2019 election continues the steady improvement in the voting sophistication of the people who have the voting volume to really make a difference in the results.