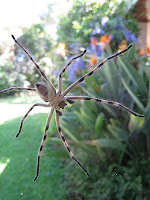 , the Rain Queen; yesterday I had a visit from a rain spider. This young fellow (or it could be a girl) has been visiting in our house for the past two weeks. This morning he came down close enough for me to carry him to the window and let him out where he belongs...in the garden! Called 'rain spiders' because of their propensity for seeking shelter from the fierce tropical thunderstorms of the African highveldt, these friendly and useful creatures catch pesky insects such as cockroaches and mosquitos. Not quite a spiderling, this teenager clung to the outside of a windowpane as he was quite comfortable in the house and made it clear he didn't want to leave. As they're neither dangerous nor aggressive (unless, like any good mother, the female is protecting her egg sac or young), I'm not too fussed about them in the house.
To the Amerindians, the spider symbolised protection from harm; to the Egyptians, spiders were the weavers of the world.  The way I look at it is, the bigger the spider, the greater the protection. A healthy speciman of a rain spider can measure 100mm. That's a whole lot of spider and a whole lot of protection! The orange flowers in the background are strelitzia reginaes, and the purple bush is a petria.  When they bloom in the garden, it's spring and the start of our rainy season. No wonder this young rain spider (or to call him by his proper name, Huntsman Spider) headed indoors!
If you would like to know more about rain spiders, please contact The Spider Club of Southern Africa at info@spiders.co.za. Rain spider facts from Fishing Owl and Wikipedia
Posted by Judy Croome | @judy_croome at 09:00

100 cm is a whole lot of spider!!
Beautiful photo. And, I love that "weavers of the world" thought.
Thanks, Judy!!

Interesting to come across this post about a spider as I had just finished reading about one in the Amazonian jungle in preparation for tomorrow's post. Your garden looks lovely. I hope your spider has managed to find a home there.

PAUL: Oops! That should be 100 MILLImetres (not centimetres) Have changed it in the post. When I read your comment and did th maths I thought a 100 cm = 1 metre and I've *never* seen a rain spier THAT big...but I have seen one the size of a small dinner plate, with legs outstretched) so I went back to check my info and saw my mistakes. *Blush*. And I agree, I love the imagery of "weavers of the world".

JUDITH: We have lots of rain spiders in the garden so I hope he'll be very happy there!
Judy

Judy, I must love visiting you so much because I kept reading this interesting post even though I'm very scared of spiders. As always, it's a joy to come here :)

Lovely photo, Judy, and I commend your care and love for spiders. I have an absolute phobia about spiders, lol, and can't quite imagine myself gently lifting one up to put out in the garden - that's hubbie's job. The bigger, the scarier. But after reading this, I'm going to try looking at spiders differently - if not exactly touching them

I love this post and photo, Judy. That is one BIG spider. I am not creeped out by spiders the way some are, but I don't want them in the house. I enjoyed looking at him and I am showing him off to the family. (Christopher wants you to be careful) He just loves you and doesn't want you to get bitten. :) We love you Judy!

Anyway, thanks for the lesson. I love learning from you. Weavers of the world is an excellent way to think of spiders.

PS- we signed the petition. :)Thanks for reminding us to do so, by putting it up on your blog. :) YOU ROCK!

A nice guy that looks scary. You sometimes meet those types. I often meet them on black metal concerts >:)

KELLY & CLAIRE: My Mom is also scared of spiders. Her worst spider experience was when I was a babe in arms, and my sister about 3. We still lived in Rhodesia (now Zimbabwe); my Dad was on night shift and my mom started baking a fruit cake…only to discover a dinner plate sized rain spider sauntering across the floor. My mom says all she remembers is grabbing my sister and I, jumping on the table and waiting. And the spider waited. And she waited, but the spider didn't move. Eventually my Dad came home, bravely took the spider outside & rescued his three girls. It was too late for the fruit cake, though, which was burnt beyond recognition!!

ROBYN: This is a small spider; they actually get quite large, but they’re very gentle and well behaved and not dangerous. Tell Christopher we send lots of love too and Theodorable sends him a special purr she saves on for special humans!! Xoxox And thanks for signing the petition!

COLD: Haha! Not that I go to black metal concerts (I’m with your old lady on that!) but having lived in mining towns most of my life I’ve met a few of those types too! (humans as well as arachnids)

You should try to go to a black metal concert, Judy. You will be amazed how many nice people you meet. People with long hair and corpse paint are usually very friendly >:)

COLD: A Rod Stewart concert was about as brave as I ever got (and my ears rang for weeks afterwards...) but I'm sure the long hair and corpse paint hides some very gentle souls.

I found a rain spider on my spinning cycle in my house the other day, i thought i would just leave it there while I grabbed the doom and stuff, but then it ran up the cycle onto the seat. It acted eztremely aggresive and I didnt even see any trace of eggs. Neither could i catch it. No cycling that day =\.. Anyone know if they're bites hurt?

Oh, its me again, you might want to recheck that image you took. Its been known that rain spiders dont spin webs since they're nocturnal hunters. The only webs they spin are nests. Which look like a weaver bird nest. ( you know the nests that hang.