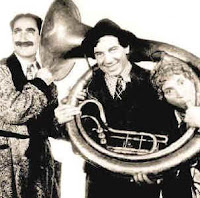 Have you met the marks brothers? No, not the brothers Chico, Harpo and Groucho Marx, but the brothers Exclamation, Question and Quotation Marks.

While the exclamation mark and the question mark both evolved from the full stop, the quotation mark stands alone—but not quite alone, as it’s always used in a pair.

• indicate a quotation  Example: ‘Shakespeare,’ Tim strummed a light chord on his old twelve-string, ‘said, “If music be the language of love, play on!” I’ll give you as much music as you can stand!’

• highlight a portion of text for a specific reason  Example: ‘We’ll stay at “The Four Feathers” tonight,’ Mr Beeves promised his wife.

The correct placement of punctuation is important when using quotation marks:

• when a sentence of direct speech is split by a speech verb, the comma must be inside the quotation mark

An exclamation mark [!] replaces the more sedate punctuation marks with extreme emotion. ‘I hate you.’ sounds a lot less angry than the dramatic ‘I hate you!’

The question mark is not quite as brash as the exclamation mark. It replaces the full stop at the end of any sentence that asks a direct question. Compare

The marks brothers serve a special purpose that no other punctuation mark can. It’s best, though, to let their use arise naturally, as they can directly affect the pace and sense of drama in your text. Make sure you get the effect you aimed for.


From the moment I picked up your book until I laid it down,
I was convulsed with laughter. Some day I intend reading it.
Groucho Marx

“The Art of Punctuation” by Noah Lukeman
“Penguin Writers' Guides: How to Punctuate” by George Davidson
“Collins Wordpower: Punctuation” by Graham King
Marx Brothers Image from FlikR/twm 1340
Posted by Judy Croome | @judy_croome at 09:00

Great post my friend. When I am beta reading I see a lot of sentences where writers use way too many or wrongly use exclamation points.

Let their use arise naturally. Wonderful words. So many folks try to force the marks brothers in. Wrongly used and the entire scene is ruined. :)
Christopher and I love you so very much. He gets upset if I don't mention his true love for you. :)

Thanks for the reminder about the correct usage of quotation and exclamation marks. I must admit when I first started reading,your use of the single quotation mark threw me. As an American, I am of course used to the double quotation marks. I find them especially useful when the speaker is quoting someone else. Then I use the single quotes. Of course that does not come up often. What I still cannot embrace is current writers who have abandoned quotation marks altogether. That always ends up being confusing and ultimately irritating. I have never figured out why quotation marks have been singled out. Why not eliminate capitalization, commas, etc.? Well, that's enough of a rant from me. Sorry.

Great post. Single and double quotation marks can be confusing. And that's without taking into account the variance between countries. Plus, the rules seem to be changing in places.