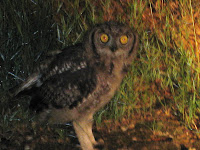 Day 1: Arrived in time for a freak tropical storm. The heavens wept and we thought we’d never be dry again. Lodge beautiful; room luxurious, although not sure about the outside open air shower. What if the giraffe I saw in the distance meanders closer?

Met our lodge companions, Gary and Dean from Battersea in the United Kingdom. What a relief! We’re so glad that we can share our bush adventure with a gracious and delightful couple.

Ended the day with a late night drive. Our search for leopard was unsuccessful despite the heavy bundu bashing over roads that didn’t look (or feel!) anything like what I’d call a road! We started by winning a challenge from a cocky elephant teenager: we were marginally bigger than he was if you counted the roof of the Land Rover, so he decided to run back to his Mom. Sissy. Later in the night, the matriarch of a nursery herd loomed out of the bushes, trumpeting a warning to stay away. We headed back to the lodge after that, stopping to recover our nerves and admire the night sky, studded with untold galaxies. The Pleiades and Aldebaran (the Eye of the Bull) were particularly beautiful.

Day 3: The vastness of the bushveld makes happy endings unlikely. Let’s hope the baby giraffe separated from his mother survives the predators. Here’s an interesting titbit for the crossword addicts: we saw a tower of giraffes and a crash of rhinos. We didn’t see a murder of crows, but we did go looking for a parliament of owls.

Another late night drive. The leopard remains elusive. Saw a jackal dance in the moonlight. Watched a spotted eagle owl hunt. Not quite the parliament we were hoping for, but he was very gallant with his company: he landed right next to the Land Rover and waited patiently for the photo shoot to be over. He made us late getting back to the lodge as, having enjoyed his company for so long, we ran into a herd of elephants browsing. Rather than risk annoying them, our fabulous game ranger Stuart let us sit in the great silence of the bushveld night as the elephants ghosted past us.

Day 4: What’s with the jackals? The Waterberg jackal population was all but eradicated by the farmers before the land was rehabilitated into bushveld, so sightings are rare. But we’ve seen six jackals so far. They’re monogamous once they’ve mated. The males chase other males out of their territory and the females deal with any nomadic female jackals. The jackal’s symbolism is connected to Anubis and thus jackals are psychopomps: they protect the souls of the dead on the journey to the underworld. My aunt (R.I.P.) died on Saturday as we left, and my other aunt is seriously ill. Am I reading too much into the jackal’s appearances?

Our morning coffee break was interrupted by a lone bull elephant. Two male lions were sighted in the plains. We searched for them but they remained hidden. Did see plenty of young: a zebra like a dinky toy and a gnu with its umbilical cord still drying under its tummy.

Our permanent game ranger Wikus arrived to take us on the last night drive. The first sighting was a plain of animals. Now I know what the Voortrekkers must have felt like as they crossed the Drakensberg into the inland plains for the first time. A massive collection of rhino, zebra, wildebeest, warthog and other animals grazing peacefully in the dying sun. Drove on to see hippos dozing in the dam and stopped for sundowners as we listened to the cough of baboons at play. Saw three more jackals! And then…we heard her roar.

Wikus tracked her down in less than half an hour and she loped towards us along the road. Tawny, powerful and regal, the lioness ignored us to continue her contact calling. The bars on the land rover vibrated with the power of her growl: what will a full-throated attack roar sound like?


We then listened to the call of the bubbling kasino frog and shared a last dinner, sitting on the deck overlooking the far horizons. One of the many great things about the bush is the people you meet. After exchanging email addresses so we can keep up contact, we said a sad “au revoir” to our new friends Gary and Dean who were off on a train trip to Cape Town. Have a great journey, guys!

Day 5: A quiet, quirky bush drive. Saw more jackal (eleven in total!) Watched a large baby rhino find it extremely difficult to suckle his Mom. Then we had a different rhino Mom & calf join us for morning coffee as we were entertained by Wikus telling us stories of the bush, including the time he was gored by a buffalo during a capture & transfer operation.

But my favourite story is how a guest's wife described a leopard to him: imagine a domestic cat, but twenty times larger. The fur colour is the same as the feel of the sun on your skin. The rosettes are the size of your fingernail, and the colour of what you see. The dark of Nothingness, for that man was blind and had been from birth. Our ranger said that, through this man’s appreciation of a Nature he could only feel and hear, Wikus himself came to understand anew the mystique of the bushveld.

After every visit I, too, feel the healing power of the bush work its magic on me and, by the time I return to the city, my soul is restored. But still it yearns to be back in the vastness of the African wilderness...
Posted by Judy Croome | @judy_croome at 15:56

"Watched a large baby rhino find it extremely difficult to suckle his Mom with his horn in the way."

Reminds me a bit of my son. Ha ha.

AHAHAHA! Justus, thinking of your son and his,er,... puts a whole new image in my mind!I think I need to rephrase that sentence. And does your son look as pathetic as that poor rhino did when he realised he was attempting the impossible?