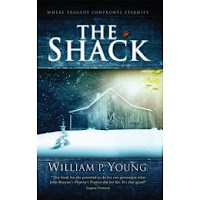 As a currently unpublished author, with the novel written as part of my Masters of Arts degree defined by my professors as “unmarketable because it is religious, rather than spiritual”, I bought The Shack by William P Young with my head. I wanted to logically analyze the difference between it and my own novel. I ended up reading it with my soul.

The Shack is defined as a Christian novel and, rejected by main stream publishers as “too religious”, was self-published by the author and some friends. (See New York Times)

After numerous rejections of my Master’s degree manuscript by agents and publishers alike, and having a personal resistance to self-publishing, I was curious as to the cause behind the surprise success of this novel.

At first, I was only aware of the validation of my concerns about self-publishing: the book is full of clichés (example, “This is one of those rare and precious moments”); suffers from ‘adjective-itis’ (example: “Well, it’s absolutely stunningly beautiful" says the hero, Mack); is repetitive (words used repeatedly within a few lines) and, at times, redundant (repeating information the reader has already been given); it ‘tells’ rather than ‘shows’, and uses lists, to mention but a few of the editorial issues. The book is childish in tone; sometimes vexingly so (I discovered subsequently that the author wrote the original draft for his children).

So how could such an apparently flawed book become a self-published best-seller? Was it because of the missionary zeal of staunch Christians responding to the extremely clever (and cheap) marketing campaign called “The Missy Project” which makes a plea for readers to ‘spread the word’ of the book through the internet and other networks? Was it really, as touted on the cover, as good as John Bunyan’s Pilgrim’s Progress? And why, once I started it, could I not put it down?

I couldn’t stop reading it because The Shack grapples with what is a major concern for many people in today’s society: where is God in a world that has gone mad? Where is God’s Love in a world filled with violence and evil, and not enough compassion and forgiveness? Where is God in our ordinary lives?

In a simple, easy–to-read style, The Shack explores the meaning of God – with the caveat that this exploration is from a clearly Christian viewpoint – and how ordinary people can allow themselves to be loved and to love within relationships, both with the Christian God and with other people.

There were many times I didn’t agree with the theology (clearly based on the Bible, and at times bordering on fundamental Christianity) or images presented in the book (example: Mack, the hero of The Shack, sits and eats meat with the character Jesus; today there is evidence that Jesus the man belonged to the Essene sect, which was vegetarian.) But Mack’s struggle to understand how to live an ordinary life based on ‘faith, hope and charity’ (where charity is agapé, or Divine Love) will resonate deeply with many readers. It resonated deeply with me.

Ultimately, The Shack appealed because it offered what too few books bring to the world today: the encouragement to use the human spirit to rise above adversity by returning to a relationship with God (however one perceives God to be), rather than allowing humanity to sink into despair and nihilism.

Although my vision of God does not always coincide with the author’s, this book – in more ways than one – is encouraging and has me dusting my unpublished manuscript off, ready to do more rewrites and risk more rejections in the spirit of hope engendered by The Shack. I write because, unlike so many books today which only show the harsh reality of our little human lives, I want to offer my readers hope that we, as humans, can aspire to something better. The success of The Shack has validated my belief that there is a publishing market for the type of books I write. Despite the lack of unequivocal scientific proof that there is a God, there is still a deep yearning within the human soul to find a way to return to the state of pre-Lapserian unity with the Divine Creator (or however we perceive God to be). The Shack's success shows this need exists and can be filled by novels that make a difficult subject more accessible to those seekers undergoing spiritual journeys in a modern world.

At times saccharinely sentimental; at others deeply profound, The Shack deserves its phenomenal success because the author had the courage to break through boundaries in the Christian vision of the Holy Trinity in a positive, non-destructive way. Young doesn’t tread too far from the security of the traditional tenets of Christianity and yet he goes far enough to meet a spiritual need that embraces contemporary society.

Despite its flaws, The Shack is an imaginative and sincere book that will bring many readers comfort. While reassuring them that God does exist, it will also make many people, who would not otherwise have done so, begin to question traditional visions of the Christian God. And that can only be beneficial to the overall spiritual evolution of humanity as we strive towards achieving the Divine Perfection that will allow us, as diverse beings, to live in a world of Love.
"...all us stumblers who believe Love rules. Stand up and let it shine."
From the Dedication page of The Shack by William P Young
Posted by Judy Croome | @judy_croome at 16:57